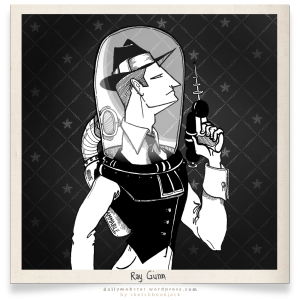 Now is your chance to get a SketchbookJack sketch of you, your mom, your dad, grandma, dog, tea kettle, teddy bear, gold fish, or maybe just leave it up to Jack. This is a rare opportunity to get a custom original for only $25 via the “The Island and the Plough”/”Captain and Crow’s ABCs” book publishing Kickstarter campaign. Not only will you get a custom sketch, but also a PDF version of the book of your choosing. Share the love: http://kck.st/1kDaMZ6

For those who have been following me for a while you have seen post after post of this book, that book, this app, and that sample page. But now, they have all come together in one single chance to make it all 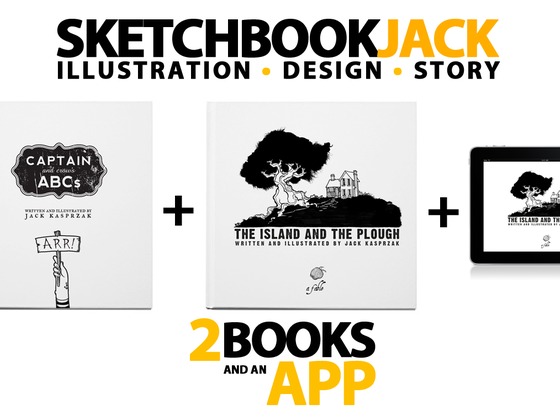 Two books, “The Island and the Plough” and “Captain and Crow’s ABCs” (plus “The Island and the Plough” interactive iPad ebook app) are becoming real with the help of a Kickstarter campaign. Think of this a pre-order, not as a risk to invest in a project. The work is already done, we just need to get them printed!
Please, check it out and share with your friends. If you can’t fund, remember that just sharing the link and getting the word out means more than you might think.
http://kck.st/1kDaMZ6
TWEET IT

If you have been wondering where I have been, I have been busy busy busy, toiling away to bring “The Island and the Plough” to interactive ebook iPad app form.  It will have originally composed music created by the professional concert pianist, Stephen Pikarsky and will be narrated by the incredibly talented (and soon to be published, himself) Bill Townley.  This is not to mention that the illustrations from the book will come to life with interactive physics, graphical words that react to touch, and additional animations that will bring the characters to life.   Once we launch this and get it off the ground, I will be going to Kickstarter to ask for some additional funds to get the physical book printed.  This will be a somewhat different take on the kickstarter platform, as the work is already done, and there will already be a product to buy (the App) if you aren’t terribly interested in funding Kickstarter.  However, if you are interested in supporting my future work, or just want to get your hands on the physical book, you can kick in (essentially pre-order) the book.  If we reach the goal, it will allow us to get the large quantity of books printed at a price reasonable for you!

So stay tuned, the App will be released in the coming weeks and the Kickstarter to get “The Island and the Plough” prints will follow immediately after.  In the meantime, chew on this trailer for a bit!

There is big news for SketchbookJack.  An interactive iPad ebook app is currently in the works.  The first app will be “The Island and the Plough.”  All the bold, black and white illustrations will come to life with animations, a narrator, and even an apple-catching mini-game.  I don’t want to spoil too much, so stay tuned and I’ll post a few more screenshots. 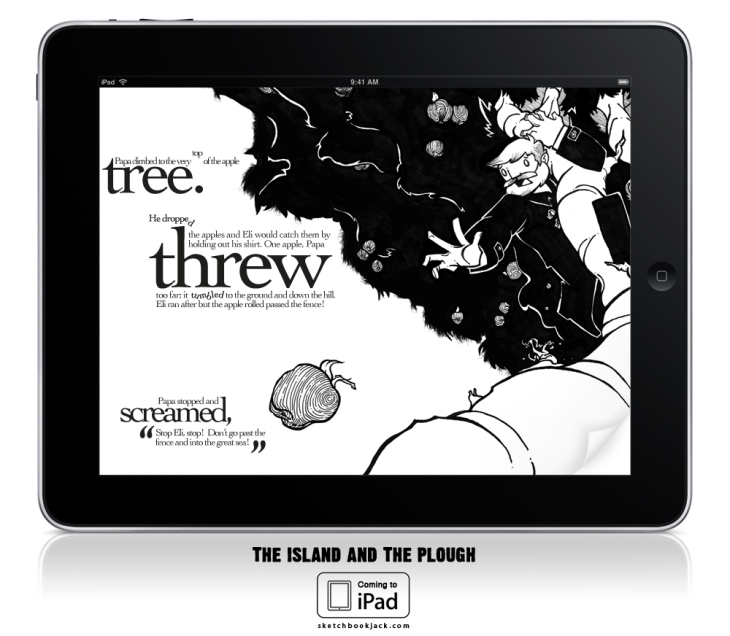 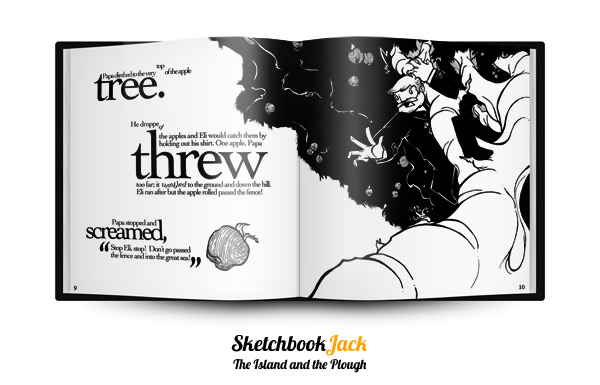 While I sort out the ISBN registries for “The Island and the Plough”, and navigate the intricacies of publishing a picture heavy book to the many eBook formats that are out there, I am busily working on writing and roughing the designs for my next project which I will begin to post about very soon.   I am super excited about my next book, as the story is really getting to me.   Everything is falling together pretty well.  Interestingly, it certainly has, unintentionally, some of the same themes as “The Island and the Plough” but in a very different way.  I have a pretty strong outline completed, promising concept sketches, and a few ideas for page spreads that I think will look really great.    I have yet to find a title that suits it but I am sure that will come along in time, but for posting purposes I will refer to it as “Salvador.”

The basic concept is a story of a fishing boat captain and his young ship mate, Skip.  The two are amidst a sleepy fishing village perched at the rocky cliff’s edge where the land meets the ocean. Their ship is but a small, single sail boat that barely seats two, not to speak of nets full of fish.  The captain also has an old tugboat, in severe disrepair, that he wishes to fix up and use because it is larger and could get them to deeper waters and carry more fish.  The naysayer villagers laugh at his inability to catch fish as well as his dream of using the tugboat for fishing.  Whilst readying themselves to push out one morning, a very unlikely new friend washes ashore.  The story unravels into three parts as the Captain and Skip adventure out to include high sea sailing, wrangling/wrestling with nature, and a hunt for an unusual treasure which can only be had with the help of their newly found friend, all while the cynical villagers laugh from afar.

Until then, I leave you with this book page layout-mock up of “The Island and the Plough” until I bring more news of a release date. 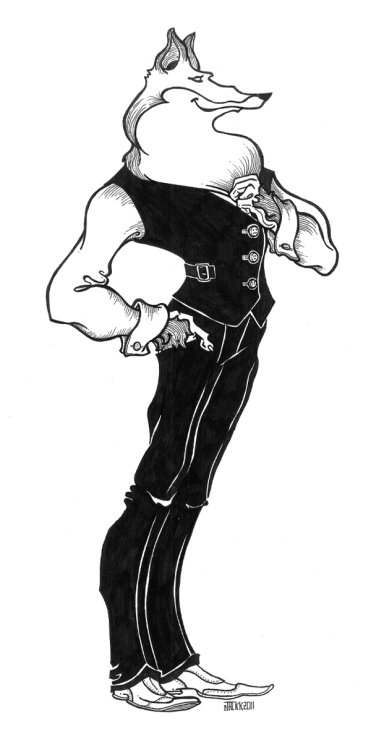 Say it a villain, but I like the wolf; I think he is rather dapper.  Fables, rhymes and fairy tales unanimously agree that the wolf (or fox) is a mean, shrewd, cunning, coy, heartless villain, a thief, a robber, and a murderer.  There, of course, are a few humorous attempts in looking at the wolf’s side of the story such as “The True Story of The Three Little Pigs,” but I declare justice is not served.  I do applaud Roald Dahl for allowing us into the life of Mr. Fox; however, he is still hunted and villainized by the farmers of the land despite being the hero of the story.  Certainly stories of the natives include heroic, god like wolves but American culture would much rather idolize the lion over the wolf.

We have a lot to learn from the wolf, and not just about how to dress.  We see ourselves in him which perhaps gives reason to villainize him.  By some social mythology structure, the goat, or the pig has inherently done no wrong and even in mistake can be forgiven, actually idolized for learning a profound lesson.  The wolf, however, gains no such glory.  His very presence is greeted by hiss and boo.  Perhaps the sharp teeth, or sleek eyes have gained him no ground.  The story could equally be rewritten to warn of tattle tale little girls, men with guns, forgetting to look in the clock, and snarky construction working pigs.  Just look how regal, how clean and cunning, dapper and dashing, steady and stark, alert and acute is the wolf.  If he were human, he would be a knight, or a Robin Hood at least.

Certainly there is an elephant in the room.  I may be carefully avoiding the fact that the wolf is, indeed, a predator and the goats and pigs certainly should be afraid of him.  He is their villain, I cannot argue that.  Yet, the wolf has a villain as well, as do we all, and despite the long held cultural structure of an innocent goat, perhaps we should write a story about The Three Grass Brothers, or The Daisy and the Tulip.  We will see how cute and innocent that goat remains. 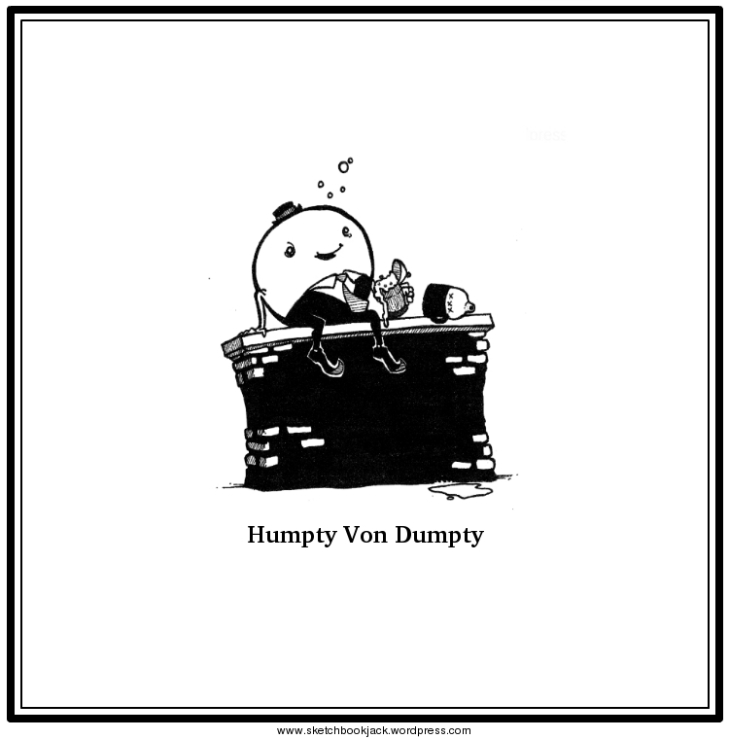 Illustration Friday submission for “Round”

I have almost reached the end of the tunnel; who knew I could actually complete a project.  I am in the middle of the second to last illustration and only have a handful of pages to do typography.  The illustrations have certainly been the most time consuming part of this process, but they were also the most fun.  I will still have to give some extra attention to the typography as I want a very graphic style to match the look of the illustrations.

Here is a single page preview of “The Island and the Plough.”  I don’t want to post too many internal illustrations as to ruin the surprise of the hero’s journey which is also why I have chosen an image from early on in the story.  I will post a more detailed synopsis when I begin to actually market and sell the book but for now this is just a tease: 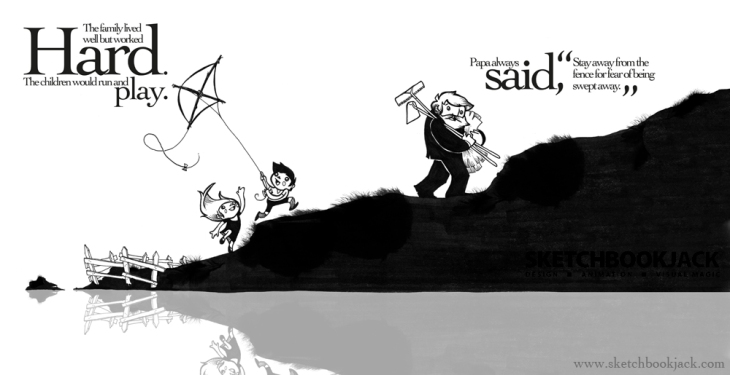 In "The Island and the Plough," Papa warns the children to stay away from the fence and the edge of the island for fear of being swept into the great white sea.

I have reworked the cover art for “The Island and the Plough” a bit to include the house as to bring in a bit more of the human element considering the story so heavily revolves around a man and nature theme.  It seems to have lost some of its perfect symmetry, hopefully for the better in an asymmetric sort of way.  It might still need a little more attention to keep the balance right.   I am nearly finished with the internal illustrations and hope to post some here; however, not too many as to ruin the story. ;) 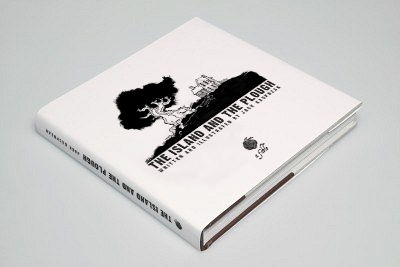 My inkings in progress.  I have a fire under me this weekend for some reason; I hope to accomplish a large majority of the illustrations for “The Island and the Plough” (or “The Island and the Plow”) so I can get into the computer at do the typography.  I specifically designed this project to have a lot of negative space, which plays into the story, to keep the project manageable since so many of my past projects quickly become overwhelming. 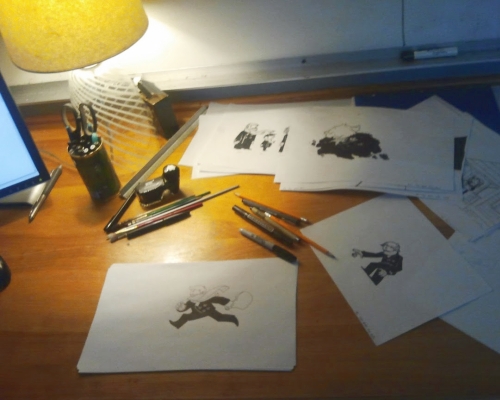 "The Island and the Plough" inkings in progress

Here is the very first image of my current project, “The Island and the Plough” or “The Island and the Plow” (I’ll have to decide on the spelling shortly.) done on a notepad as an expressive gesture drawing but turned out to say more than I thought it would.  The story revolves around this farm house built on an island where a small family lives.  I have begun writing the story; it will be told in a children’s fable style.

Fiep, a farmer and father lives, basically stranded, on an island where they have a large apple tree, their house, and a small farm.  The family lives quite happily there until the winter comes along and they realize this year’s harvest did not yield enough to get them through the winter.    I won’t reveal the rest of the story, but it involves Fiep getting off the island but in a very unusual and unexpected way.

I hope you will follow along as “The Island and the Plough” unfolds.  Cheers, Jack. 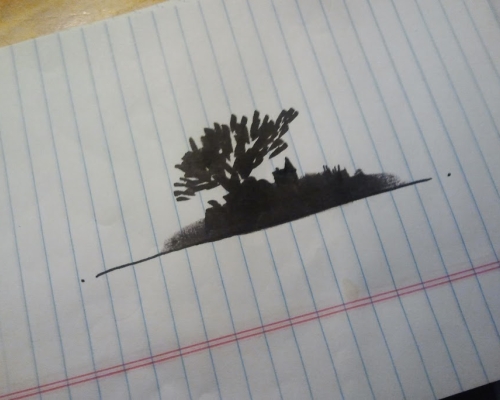 The very first gestural concept for "The Island and the Plough"