Jouez! Ultraswing is back, and this time with a commission piece for a gig poster for their live shows.  You know, the kind of poster that will plastered on telephone polls, the backs of pubs, and billboards.  This was an incredibly fun project to work on, so if you are perusing the streets of Brighton, Newhaven, Worthing, or maybe even London, be on the look out for these plastered about.  If you see them, take photos and send them to me! 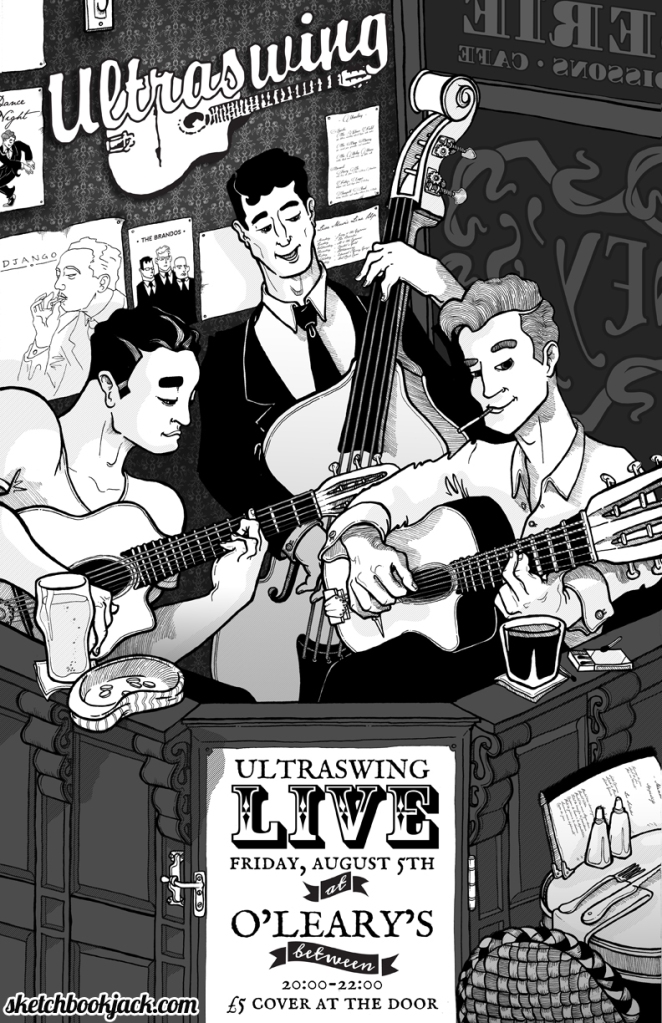 The prints for DeFacto Entertainment’s 7″ vinyl single have arrived!  Here are the final, printed versions of the illustrations I did for their album art.  If you enjoy hip hop, rap, and/or the illustrations involved you can order your own here: http://defactoent.bandcamp.com/album/choose-your-weapon-feat-jehst (Photos courtesy of DeFacto Entertainment)

The earlier shots I posted of the work in progress can be found in this earlier post. 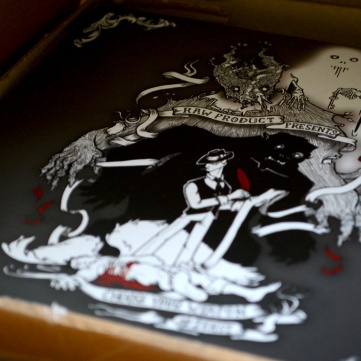 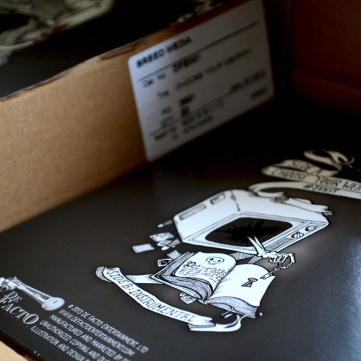 “Chooes Your Weapon” featuring Jehst by Raw Product (Back Cover)

“Choose Your Weapon” featuring Jehst by Raw Product (Side A) 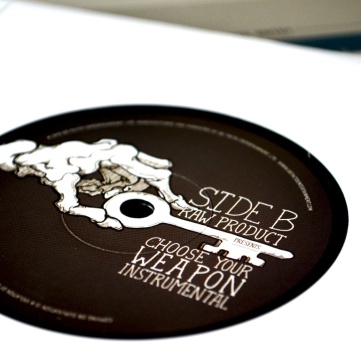 “Choose Your Weapon” featuring Jehst by Raw Product (Side B)

I’ve been waiting for a while now to share this with you, and since the producer has released the art I can show it now.  This was a great project to work on and it will be printed on limited edition 7″ vinyl no less! I was given the lyrics of the song and came up with some characters and symbolism.  There will also be art to see for the back sleeve and the inside vinyl label itself but those are yet to be released.  Here you can find DeFacto Entertainment and Raw Product.  Below is the final front cover and some work in progress, making of’s so you can see how the layout, the sketch and ink process.

The author, the ogre, and the wickerman 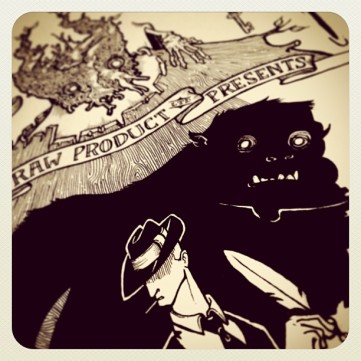 The author and the ogre 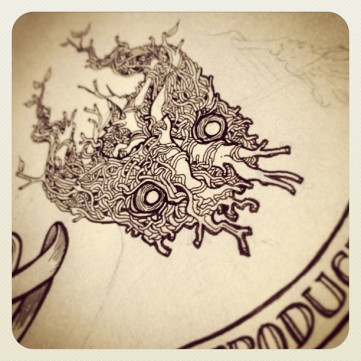 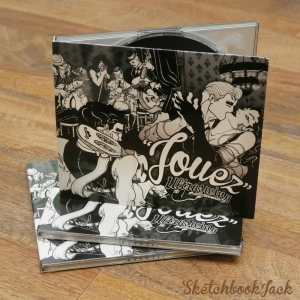 My copies of Ultraswing‘s “Jouez” have arrived; they look so great printed!  There is always something pretty great about seeing work printed as it has such a different feel that being digitally onscreen.  They have a tactile substance that I love.   The music is great too, so if you like gypsy jazz in the style of Django Reinhardt be sure to check out Ultraswing; they have worked really hard to putting this album together and I listened to it on my drive up to the north valley this weekend and the tracks are wonderful.  You can have a look at flat, larger versions of the covers from an older post here. 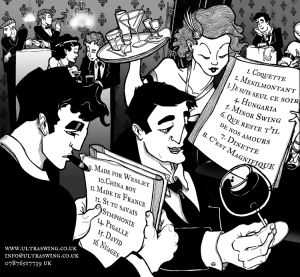 Ultraswing, the UK gypsy jazz band has just released their next album, “Jouez,” for which I did the album art work.  This was a great project to work on, especially for developing some fun characters, interesting vignettes and scenes.  They wanted to go with the idea of a speak-easy style jazz club featuring the full ensemble as well as all the characters that go along with that type of lounge.  As soon as I receive my copies in the mail, I will be sure to post some photos of the product as well.  There are interior panels and the disc itself, as well.  If you like jazz, and especially gypsy style jazz, in the vein of Django Reinhardt you should certainly check them out and give them a listen; plus, they are super cool cats.

I am sure you are wondering where I am, or at least why I haven’t been posting much lately.  I have had my hands quite full with a few projects that I hope to post results for very soon.  Aside from trying to close out “The Island and the Plough” and shop it around to a few potential distributors I have been working on the next book as well as some super cool commission projects.  I will be doing the album art for Ultraswing, a UK gypsy jazz band.   They decided they wanted a little change of pace from their prior albums and wanted a full black and white illustration spread.  Once they are ready to release on their website I will begin posting some images soon.  All I have to say right now is that this was a really great project, creating some awesome little characters and vignettes and had a lot of fun.  Can’t wait to show it off.

I have long been inspired by the “Gypsy Jazz” musicians of the twenties and thirties, specifically Jean “Django” Reinhardt.  One might say he invented the Gypsy Jazz style (sometimes called “Hot Jazz” stemming from his home venue, “The Hot Club” in France) and it could very well be all because of his handicap, which I think is quite incredible.  As a young man, he was in a fire which literally seared the last two fingers of his left hand together, fingers that are obviously very important to a guitarist.  Being greatly inspired by Spanish Folk, Gypsy music from eastern Europe, and American Jazz which was in full swing at the time seemed to have helped lead way to his two finger quick style; it is unmistakable and often replicated.  The fact that he worked with his handicap rather than letting it overcome him, much like Ray Charles or Stevie Wonder, is simply astounding.  If you have yet to hear any of his music, you simply must.  Below I have included some of his songs as well as other artists like him including the new wave of more eclectic gypsy jazz revivalists such as Caravan Palace and even DeVotchKa.

And something a little more contemporary: