Now is your chance to get a SketchbookJack sketch of you, your mom, your dad, grandma, dog, tea kettle, teddy bear, gold fish, or maybe just leave it up to Jack. This is a rare opportunity to get a custom original for only $25 via the “The Island and the Plough”/”Captain and Crow’s ABCs” book publishing Kickstarter campaign. Not only will you get a custom sketch, but also a PDF version of the book of your choosing. Share the love: http://kck.st/1kDaMZ6 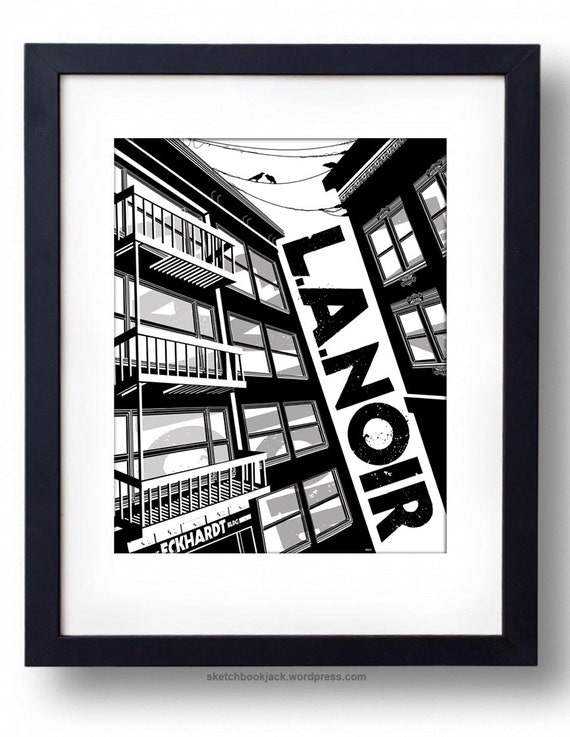 I have started a few noir inspired posters and am thinking of doing one for each city in which I have lived or visited.  I probably can’t do everything I have visited, and probably no one wants a poster from half of those cities, so I’ll hit the big, fun, major ones.  But, I thought I’d start it off with L.A. as I have been for the past eight years and it seems deserving.  I’ll add them as prints to the shop as I get them done.

For those of you who have been following me for a long time, you may remember the “Cats Are Aliens” doodles I did on napkins or perhaps you have seen them popping up on Instagram. I found those drawings, scanned them and gave them some new life. I’ll continue to collect them here in this gallery as I finish each one. Enjoy!

I have killed another soldier, a faithful old pen.  He was but a commoner yet filled a many jacket, blackened a many hat, and darkened a many tie.  Yes, I use a Sharpie, sometimes, for inking.  I know it is not preferred and you may already be furling your brow at the low manner in which I behave but I have come to like the Sharpie.  It is simple and consistent and widely available.  I can carry them in a bag and are great for travel or quick works.  I know my dirty, low class pen will never survive the test of time without any “archival quality” ink.  It will wither and fade in the brash sunlight of west Los Angeles, but I don’t care, for it is a impotent artist who requires special tools.  It is a sad artist who blames his tools.  I too, once brandished a fancy Moleskine notebook of which holds glorious, legendary powers in hopes to harness the same genius that bled from Hemingway’s veins, hoping it would make my work magical.  I too, once carried the famed Micron pen and the Staedler pencils, because no actual artist would dare carry (dare not say use) an unbranded, hideously yellow, #2 pencil of which is not even worthy of using the HB insider lingo.  Alas, I still use India Ink, metal tip pens, and brushes but for most everyday workings I have squandered such dreams of Hemingway and draw many of my characters on the forbidden copy paper of which a common, gasp, digital printer might use.  Sure, judgments are passed, scoffs and tisks are handed by those in the supply store.  But I have work to do, dear critic; I have not time to wander the supply store in search of the lesser user of commoner tools I feel may need a lecture.  Unfurl your brow, fellow inker, embrace your unorthodox use of illegitimate tools.

A couple of quick tugboat sketches for “Salvador”

We have a little mouse that lives in the bush outside.  If you look carefully between the branches and leaves, there is a whole little maze world he has built.  In one respect it looks totally alien to everything we know but also strangely familiar.  He seems to have gathered every bit of twig, leaf, fur, hair, paper and discard to assemble an elaborate labyrinth.  It runs eight or nine feet across and doubles back and down, wrapping on itself.  Scale is a funny thing.

I’ve always found miniature things very intriguing.  Things follow all the same rules and laws as we do on our scale of life, but there is something very alien and eye opening about thinking about the world on a smaller scale.  The construction of objects from our everyday are viewed in a completely different light just by changing scale.  Thread becomes rope and needles are large dangerous objects much likes swords.  The miniature world has been much played in the story telling world, mice especially, but simply thinking about the many little objects on your desk or table, or the many components that make up many of our more complex objects reveals a whole additional dimension when thinking about it at scale.  Creating scenarios of small characters using out of scale objects is always a fun exercise, and though much played out, offers an unlimited array of stories and characters.

Imagine what a creature one hundred times our size would think of the way we utilize the many things in our lives.  What objects around you would be wonderfully utilized to advance you forward on a smaller scale?