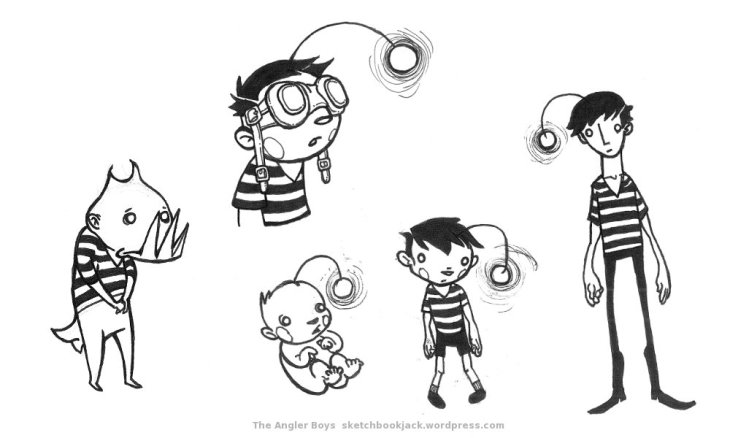 Lament the story of the Angler Boys.  Surprise and joy befell the Angles household when Mabelle and Hank Angles announced she was expecting.  The excitement grew further when Mabelle learned it would be twin boys.  But, at birth, something was revealed as strange.  The doctors called it “Acute Lophii-deformes” and it would seem the bouncing baby boys shared undisputed features of the Anglerfish.  The Angles were advised to shut them away, home school them, and to investigate special therapies and operations to remove them of these “features.”  Mabelle and Hank didn’t feel right about shutting them off from the world, so they decided to go on as if nothing was the matter.

Things were rocky, here and there, but the two boys lived together in a happy, loving home.  It then came time to enroll them in school.  Little Luke Angles did quite well; the other children thought his “lightning ball” was cool.  He was the best to have sleepovers with because he could keep the blanket fort lit nicely.  The girls thought it was cute too and they would sigh and dreamily stare, saying, “To be with Little Luke Angles was like being under the twinkling stars.”

All was not so well for Young Leopold Angles, who inherited the unfortunate features of an anglerfish teeth and tail.  The girls were all scared of him, and the boys called him snaggletooth, jaws, and walrus.  He was a favorite target for the bullies and often found himself escaping to the far end of the playground to be alone.  Luke would try to stick up for him and include him in their games, but no matter his efforts, the other children would shove him away.

One day, Mabelle Angles came to wake them for school, but Young Leopold was gone.  Hank, Mabelle and Luke looked all over town and asked everyone around, most of whom just laughed.  Days passed, weeks passed.  Leopold was nowhere to be found.  Luke would search through the night with the help of his lightning ball.  And thus, began “The Riveting Adventures of Angler Boy.”  (A follow up to “Flashback: Angler Boy“) 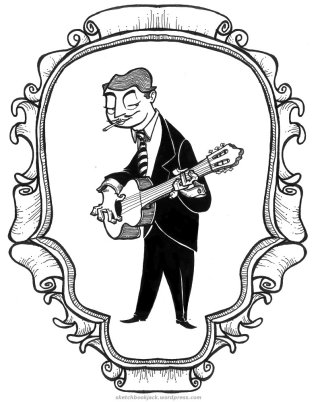 I have long been inspired by the “Gypsy Jazz” musicians of the twenties and thirties, specifically Jean “Django” Reinhardt.  One might say he invented the Gypsy Jazz style (sometimes called “Hot Jazz” stemming from his home venue, “The Hot Club” in France) and it could very well be all because of his handicap, which I think is quite incredible.  As a young man, he was in a fire which literally seared the last two fingers of his left hand together, fingers that are obviously very important to a guitarist.  Being greatly inspired by Spanish Folk, Gypsy music from eastern Europe, and American Jazz which was in full swing at the time seemed to have helped lead way to his two finger quick style; it is unmistakable and often replicated.  The fact that he worked with his handicap rather than letting it overcome him, much like Ray Charles or Stevie Wonder, is simply astounding.  If you have yet to hear any of his music, you simply must.  Below I have included some of his songs as well as other artists like him including the new wave of more eclectic gypsy jazz revivalists such as Caravan Palace and even DeVotchKa.

And something a little more contemporary:

Several have asked to see and learn more about the way I work and how I prepare for drawings;  I hope to post additional drawing processes in the future.  Here is an example from The Daily Mobster in which I prepare a concept which is usually a character name or an exaggerated feature I want to focus on and begin generating the look.  I can usually come up with a name, but I also wrote a little script that will generate random names and nicknames for me if I get stumped.  Some occasions produce the drawing first and the name afterward, but that is usually an exception.

I begin with a flurry of rough shapes and mood arc lines; in this case the mood line was straight as this guy is pretty somber and straight-edged.  When dealing with exaggerated characters, especially ones that will only be seen in black and white and have no obvious color to define them from the others, shape is very important.  It is the second thing our eyes process after contrasts.  I play around, drawing and sketching various shapes, silhouettes and sizes until I find one that captures the personality and allows for the details I want to include.

Once I choose a sketch concept that seems fitting, I may do a quick study of a specific spot or detail that needs further revision or attention.  In this case it was the hand holding the scissors.  Then I draw the to-scale underlining sketch.  I will ink directly on my sketch, so this is drawn very lightly and somewhat loose as I already have the thumbnail to guide me.  The first line of ink goes on, directly over the pencil, which defines all the major lines and I do the small detail accent lines with a different weight ink pen. Then I block in the blacks with a heavy pen or ink brush (if I am at work or traveling, ink brush is a little too messy).  After all the blacks are filled, then I do the line weighting and the line shading/hatching.  I prefer to control the line weight by simply inking in more lines next to the originals rather than using a brush pen with pressure or a heavier pen, which would be faster, but I feel I need more control over the exact thickness.  Finally I fill in the hatching for the fine details or denote key shadows that help to give depth or define shape.

The last step is to do a quick composite on the official mobster background and paint in some shadows on the wall.  Preparation in any project is important.  Sure there have been several drawings that are really just sketches and turn out great, but as soon as something expands to more than that or has an ultimate goal preparation helps a lot, thumbs and rough ideas are always the way to go.

If you haven’t found Greg Peltz yet, now is the time.  Obviously the dapper Star Wars characters are right up my alley, but the other stuff he does is incredible.  I mean he made his own Magneto helmet from scratch.  That’s crazy. 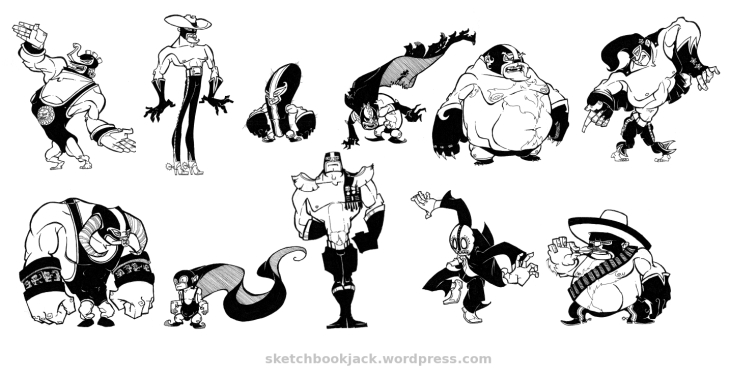 Who doesn’t like Luchadores? The always look so schnazzy in their pressed suits and fancy masks. I had started a series of Lucha Libre wrestlers a while back that took it one step further and got some goofy characters and costumes out of it. I started to make retro style advertisement posters for each character. I found the few that I did and decided I could come up with a few more, so here is the series as it stands now. I am not exactly sure what I might do with these, but I think retro/circus/advertisement style posters might be kind of fun to do, each with its own theme.  From top-left on: “El Dios”, “Gaucho Marx”, “El Cactus”, “Chupacabra”, “Oso”, “El Rey”, “Toro Toro”, “Mini Mono”, “El Capitan”, “Sr. Muerto” and “El Bandito.”

Hello all and Happy New Year.  It was quite a busy holiday for me, but I have been able to keep up with The Daily Mobster.  I have high hopes, good intentions, and a flurry of ideas in my head for this coming year and will be posting plenty of good content, illustrations, links, and fun.  I thought I would start this year off by sharing, hopefully something new, with you in hopes you find something inspiring.  Here are a few of my favorite links:

I will bring more in future posts.