The cantankerous old grump hobbled his way home through the blustering snow and dangerous ice, completely unaware his life was following in his wake.  A young weak flame, his past, hovered right behind him.  A giant lumbering man, his present, walks careful aside him as not to fall out of step.  Ahead of him, creeps the shadows of his future and into them he ventures.   A lingering cry haunts the alleys and the streets, chains clank and rattle of warnings to a ruined man as he bitterly  scoffs off the world, heading home to sulk.

Here is this year’s rendition of Dickens’ Ebenezer Scrooge along with all four ghosts.  I stayed with the traditional flame character for the Ghost of Christmas Past.  I had to do three or four thumbnails, and a nearly full render of another drawing to get a composition that I liked since I wanted them stacked, using the Ghost of Christmas Yet To Come as the backdrop.   I haven’t really seen Scrooge done with a beard, sometimes Victorian chops, but usually clean shaven.  I thought it might be fun to give him a cranky old beard and make him stout rather than long and lanky.  I had a lot of fun doing this one, hope you enjoy.

“Darkness is cheap, and Scrooge liked it.” – A Christmas Carol, Charles Dickens.

Say it a villain, but I like the wolf; I think he is rather dapper.  Fables, rhymes and fairy tales unanimously agree that the wolf (or fox) is a mean, shrewd, cunning, coy, heartless villain, a thief, a robber, and a murderer.  There, of course, are a few humorous attempts in looking at the wolf’s side of the story such as “The True Story of The Three Little Pigs,” but I declare justice is not served.  I do applaud Roald Dahl for allowing us into the life of Mr. Fox; however, he is still hunted and villainized by the farmers of the land despite being the hero of the story.  Certainly stories of the natives include heroic, god like wolves but American culture would much rather idolize the lion over the wolf.

We have a lot to learn from the wolf, and not just about how to dress.  We see ourselves in him which perhaps gives reason to villainize him.  By some social mythology structure, the goat, or the pig has inherently done no wrong and even in mistake can be forgiven, actually idolized for learning a profound lesson.  The wolf, however, gains no such glory.  His very presence is greeted by hiss and boo.  Perhaps the sharp teeth, or sleek eyes have gained him no ground.  The story could equally be rewritten to warn of tattle tale little girls, men with guns, forgetting to look in the clock, and snarky construction working pigs.  Just look how regal, how clean and cunning, dapper and dashing, steady and stark, alert and acute is the wolf.  If he were human, he would be a knight, or a Robin Hood at least.

Certainly there is an elephant in the room.  I may be carefully avoiding the fact that the wolf is, indeed, a predator and the goats and pigs certainly should be afraid of him.  He is their villain, I cannot argue that.  Yet, the wolf has a villain as well, as do we all, and despite the long held cultural structure of an innocent goat, perhaps we should write a story about The Three Grass Brothers, or The Daisy and the Tulip.  We will see how cute and innocent that goat remains. 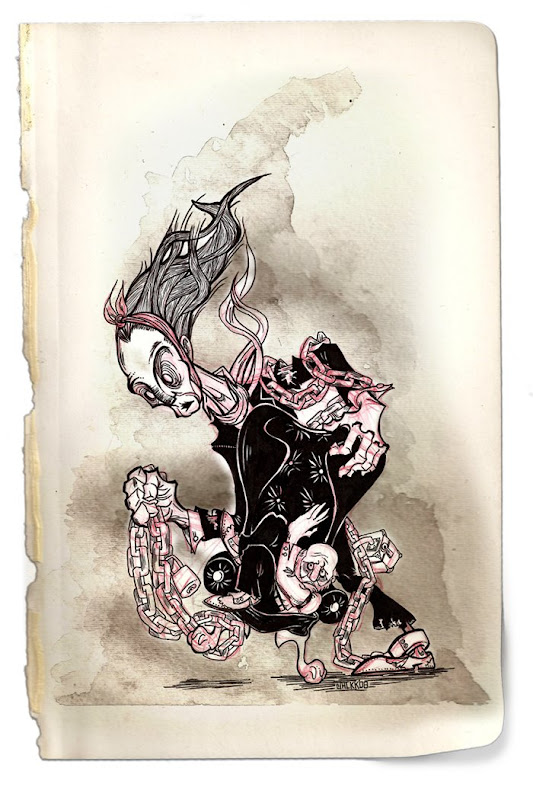